Emily and her Robot: a guest post by Emily Fewtrell

writes about her recent experiences of engaging children through advanced technologies, with a ‘humanoid robot’

For the past few months I have been fortunate enough to have been working for a Leeds based company (Pudsey Computers) helping them to develop their educational resources. In particular, Steve (the Boss) was very keen for me to help them put together a package of activities and fun stuff to show to and use with children in schools.     Despite being from a computing teaching background this was really an unknown territory – when invited to participate I had never even heard of NAO robots! But when I ‘met’ NAO ROBI for the first time I have to say I was kind of smitten… A bit weird, since it’s a robot, but really – he’s so cute! (and he is also very polite and toilet trained – quite a bonus in my book)

Immediately I was entranced by his calm demeanour and his super-intelligent abilities. He is an incredibly complex piece of kit! However, what also became immediately apparent to me is how much of a ‘WOW factor’ this unworldly little character would have on an audience of children… and that this could be a real ‘Hook’ to draw them into a world of NAO Story telling. 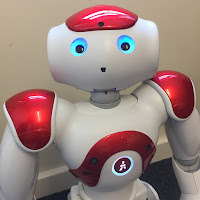 This was a germ of an idea which started to grow quickly into a mini project which could be developed for schools – and which I hoped would engage even the most reluctant writers; especially those children who struggle to find their ‘voice’ in the classroom. What I also wanted to create was a project that would encourage collaborative writing, and for NAO ROBI to be the ‘Story teller’, and recite the children’s writing in real time. So, that’s what I set about doing…

First I put together some ‘teaser’ resources (printable images and a specially made postcard), which could be sent to the class before NAO ROBI even stepped foot in the school. These are full of cryptic word clues and unworldly images, designed to stimulate talk and speculation from the children: “What are the pictures of? Where has they come from? What is going to happen? Why have they been contacted? Who is it? How can they find out more? When will they get some answers?” My hope was that this would generate sufficient expectation, excitement and anticipation that something a teeny bit unusual was going to happen. These ideas and suggestions could be recorded by the children and teacher in note form; I produced a sort of ‘Talk 4 Writing’ Book Talkstyle activity to support teaching this. 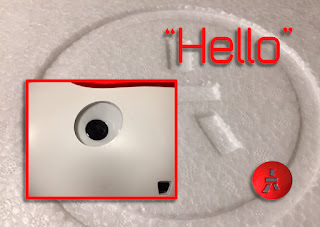 I was keen to capitalise on this enthusiasm and harness the ideas and imaginings that the children would inevitably have; my plan for making that happen was to take NAO ROBI appear in the school the very next day: Guaranteed to cause a stir! NAO ROBI has a range of built in programs that can be used to demonstrate his fantastic capabilities. Once a few of these had been shown to the children the next move was to have groups of children work together to write a story which would explain what and who NAO ROBI is, what he has done and can do, why and how he can to be there in their classroom, and all sorts of other (much more imaginative) things which would be pieced together to create a unique story of NAO ROBI, almost an autobiography for him. 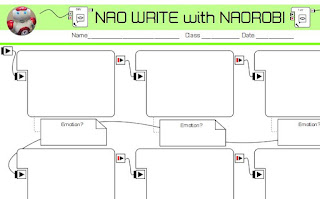 What makes that special? The next part: All of the contributions of the class members can be programmed in to NAO ROBI in real time, so that their words can be spoken and dramatised immediately in a way which is so much more fun and engaging – really different – making NAO ROBI the story teller who is narrating their story. A particularly brilliant enhancement to this process is the addition of the ‘emotions’ that can be programmed in too – the use of ‘Animated Say’ options which children can select from to add a special dynamic to their writing.

I put together a writing template which looks a bit like a flow chart – or a robotic story map, with plenty of room for their imaginative story contributions, and which encourages children to choose the emotions as they go – all that is left for the teacher to do it to select the parts of the story from groups or individuals, that can be added to NAO ROBI’s story program by simply typing the text into the boxes and linking them up within the ‘Choregraphe’ software. The order of the chunks of story can be changed, and the emotions that are acted out can be edited if needed too. In this way, my hope was that every child would contribute, and every child would have a voice – through NAO ROBI speaking their words. Even the most reluctant of writers would want to speak through NAO ROBI; having watched children program him it is plain to see that every child wants him to say and do things they have created – and it’s magical for them to see and hear that happen.     A final flourish would be for the finished story to be performed in its entirety and video recorded – the class would be able to keep this and publish it if they wished – something unique and special that has been created by the whole class and presented in a completely different way. Hopefully something that the children would remember and talk about for years to come; ‘Do you remember when that robot came to our class and told stories?…’ I think it has that memorable quality about it.

When NAO ROBI has returned to his base station and the children are left with their amazing experiences to draw from, the idea is that even more writing can be developed and linked with the theme. The opportunity to capitalise on this learning adventure is there for the taking – generating some even more high-quality written work from this starting point. The Universe is their oyster!     NAO ROBI is available to hire at your school for short or longer visits. Contact Pudsey Computers for information or go to http://naorobiwrites.blogspot.co.uk/2016/11/nao-robi-story-teller.html